Going to Israel? Go for it!

Read more in this article about my amazing 5 days in israel. To be honest, at the beginning, I hesitated a long time before embarking on the adventure. I was afraid of the climate of war that reigns in Israel.

I read a lot of travels reviews on that trip and I inquired a lot in travel groups to ask if it was a safe country to travel to or not. Since the reviews were positive, I decided to go on this trip and I did not regret it for a moment! I never felt insecure. We went to Israel at the end of January, but the weather was still good. It was around the 20 degrees. ☀️

Unfortunately, we were able to spent only 5 days in Israel before heading to Jordan, but even if it was short it was an amazing trip and tried to see as much as possible! Of course I would recommend more than 5 days in Israel to fully explore the country.

Below, an overview of our 5 days itinerary in Israel. 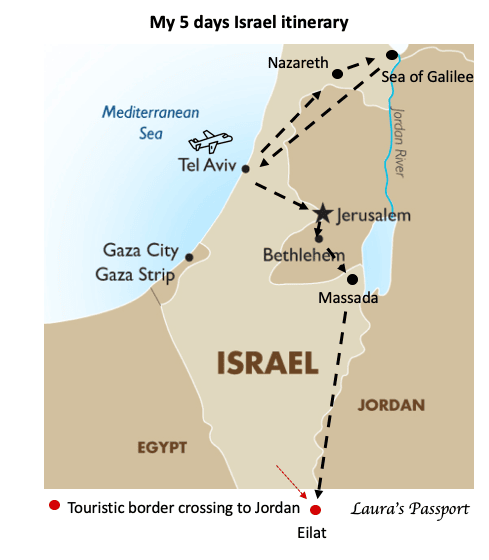 Our journey started in Tel Aviv. When visiting Israel, you must spend at least 24 hours in Tel Aviv. This modern, laid-back city on the Mediterranean Sea is an instant favorite for visitors. It is the perfect mix of city and beach living with a thriving nightlife. It is possible to see the highlights of Tel Aviv in just one day, but many people choose to spend at least a few days here to fully explore this vibrant city. While it is easy to get out and see the city on your own, there are a variety of different tour options, depending on your interests. Tel Aviv is also a great starting point for our tours to Jerusalem, the Dead Sea, and the north of Israel.

5 things to do in Israel

We started our visit of the city by renting bikes for a few hours. This was a good way to to get a great insight into the city as we didn’t have much time in Tel Aviv. We started to bike on the coastline to get us to Jaffa.

Jaffa (also known as Yafo) is the ancient port city out of which Tel Aviv has now grown. Jaffa flea market is a well-known attraction of the area, with vendors selling a diverse range of interesting and unique products.

It is a nice place to take a walk and discover hidden corners. We really enjoyed it!

After Jaffa, we biked to the Florentine district, which is famous for street art and graffities. The architecture, graffities, streets, and bars make of that district a very special place.

Then we crossed the famous Rothschild Boulevard. It is one of the most expensive streets of the city, and therefore one of the city’s main attractions. After that we ended at the outdoor Carmel market.

Aim to be around the Carmel Market, the heart of Tel Aviv’s food scene around lunch time. The city’s main street market has transformed into the heart of the city’s food scene, with traditional delicacies now found alongside trendy and popular eateries.

4 | Walking along the coastline

The atmosphere of Tel Aviv is very relaxing. The people are cool and enjoy their life. On the coastline you can see a lot of surfers.

Tel Aviv is known for its beaches, so why not spend the afternoon soaking in the sun? The beach in this city stretches for miles and each part has a different feel or personality.

In the evening, we enjoyed the nightlife of Tel Aviv. This city is really a good place for having a good time and just chilling around some drinks.

Many of Tel Aviv’s pubs and bars open early in the afternoon and stay open till late, with quite a number featuring live music at least once a week – everything from “dance” and “house” to Middle Eastern, reggae to rock, and jazz to blues, and all forms of underground sounds and vibes.

f you were looking for the ‘heart’ of the Tel Aviv night, you’d have a good chance of winning the argument by pointing to the southern end of Rothschild Boulevard and the surrounding streets (Allenby, Levontin, Yehuda Halevi, and Lillenblum, for instance). Many of the city’s hottest spots located within a few hundred meters of here.

The second day of our journey is dedicated to a full day tour to Nazareth, the sea of Galilee, Capernaum and Yardenit. We booked this excursion via GetYourGuide. It was a fascinating day.

This visit allowed us to see the famous sites of the Holy Land. We began our journey by travelling along Israel’s scenic coastal plain via the plain of Armageddon to Nazareth. In Nazareth, we visited the Church of Annunciation and the Church of St. Joseph’s carpentry.

We also stopped at the famous Sea of Galilee and at the ruins of the ancient synagogue of Capernaum. Finally, overlooking Tiberias, we visited the site of baptism on the Jordan River, where you can have a baptismal service.

On that same day, when we arrived at Jerusalem, we immediately went to Bethlehem in Palestine, as we had an excursion booked with the company GetYourGuide.

Once we passed the border, we had to change our bus to a Palestinian car, to make sure we will not be in trouble during our visit. The contrast between both countries is huge. It was a chock to me, and it felt like I went back in time. Everything is so different. Once in Palestine, we met our guide for the day, a native who lives in Palestine.

We regret not having spent more time in Palestine to soak up the culture. We did not feel insecure, and the people were very nice with us. An interesting point about our visit is that we realized things are not like we usually see on medias and newspapers.

In the afternoon, we went back to Jerusalem and had a walk into the old Jerusalem.

Jerusalem is a surreal and vibrant city, holy to Jews, Muslims, and Christians. It’s an important city of Israel. There are 4 districts in Jerusalem, the Jewish, the Muslim, the Christian and the Armenian.

Things to do in Jerusalem

Go to the Old Jerusalem and get lost in the 4 districts of Jerusalem. The vibes here are amazing!

On the next day we did another excursion to Massada National Park, the Dead Sea and Ein Gedi, again booked with the company GetYourGuide.

It was an amazing day, but a sportive one. We woke up in the night as the departure was at 4 o’clock in the morning, to go contemplating the sunrise up Masada.

Once arrived, the bus dropped us off, and we immediately started to hike to the top by using the flashlight of our phones to light up the path. The hike lasted approximately 30 minutes. Once up, we got an amazing view and enjoyed the spectacular sunrise. 🤩

Masada is not only important because it is a UNESCO World Heritage Site or an ancient fortress occupying a breathtaking, strategic location high on a flat plateau above the Dead Sea, but because of its symbolic importance of determination and heroism which continues to this day with many Israeli soldiers sworn in here.

This mountain is one of the greatest archaeological sites in Israel and, perhaps, across the world.

After about 1 hour on the site, we went back down to go to our next stop, Ein Gedi, which is an oasis and a nature reserve with a beautiful cascade. We spent around 1 hour in Ein Gedi. Then, right after we were dropped at the Dead Sea, and had some free time to swim into the Dead Sea.

The Dead Sea is the lowest place on earth, a place of beauty, and a place you should really visit during your time in Israel.

On the last day of this 5 days in Israel, we went to Eilat, a port city in the southern extremity of Israel. The reason why we went here is that we had to cross the border to go to Jordan. Eilat is the main touristic border. From here you can go to Jordan or Egypt.

Eilat is also a seaside resort where many tourists go for their holidays. Personally, I didn’t want to spend a lot of time here, because there is nothing really authentic.

My restaurants’ recommendation in Israel

I hope you enjoyed reading my 5 days trip in Israel. Do not hesitate to leave a comment. 🤗 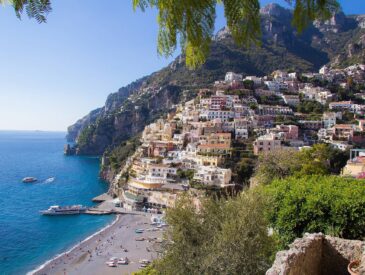 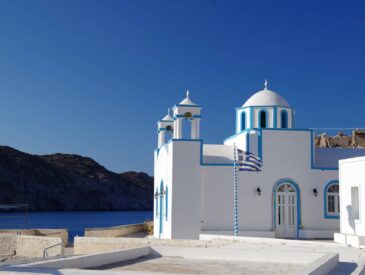